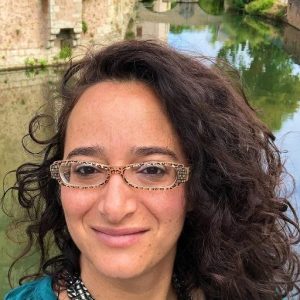 Violetta’s family has pioneered in Africa for two generations, first her grandparents to Spanish Morocco during the Ten-Year Crusade, and her parents following suit by pioneering in Central Africa since 1981. After her undergraduate degree in International Relations, Violetta served and then traveled throughout Africa before serving at the Bahá’í World Centre for two and a half years. She then served at the Office for Public Information for theBahá’í International Community in Paris before living in Los Angeles for a few years, some of which were spent as a Localization Producer for video games at Disney.

In 2013, Violetta returned to Pointe-Noire, Congo where she currently lives. She is involved in graphic design work for software, education, and public health projects. She also makes educational videos for the school her parents own. In her service to the Faith, she has been assisting the Continental Board of Counsellors with special projects relating to capacity-building of administrators, statistics visualization and analysis, public health infographics, and booklet and brochure design for various projects.